«Personalities that define the present-day Engadine.»

Portraits of personalities that define the Engadine of today take centre stage in the new edition of the magazine «Active Alpine Lifestyle». Olympic champion Nicola Spirig, sports manager Gian Gilli, gallery owner Gian Tumasch Appenzeller, and butcher Ludwig Hatecke are four of the protagonists interviewed. They all agree the Engadine valley is an inspiring place. And, they reflect, despite all the negatives, the pandemic has also brought its ups to their lives. The magazine – now in its 14th issue – is published by Skiservice Corvatsch. 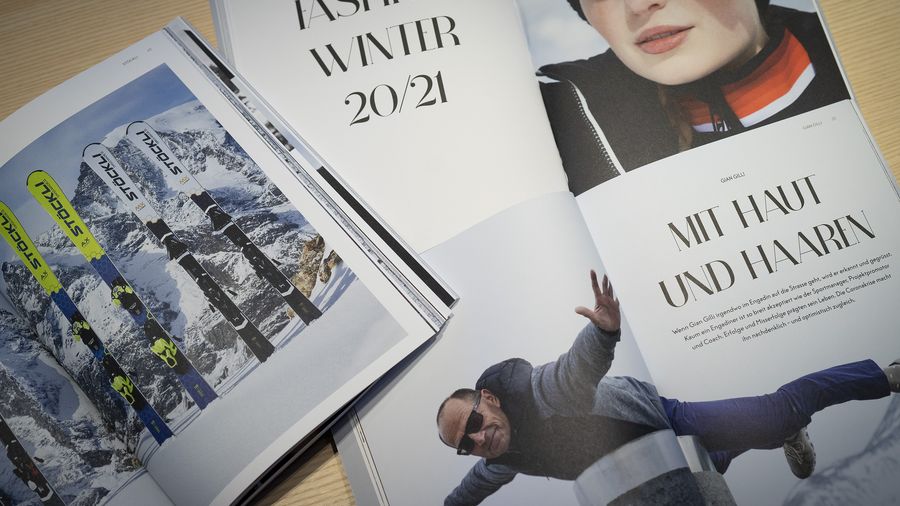 The Engadine valley is the perfect place to spend time during the pandemic. In the new magazine «Active Alpine Lifestyle», just out, nine personalities explain why they, these days, they would rather be in the Engadine than anywhere and how the valley is shaping their lives. «Our magazine portrays people whose actions and thoughts define what the Engadine of today stands for,» declares Conradin Conrad, the publisher of the magazine. «The Engadine is the valley of endless possibilities; our protagonists show but a few of them.»

Triathlon Olympic champion Nicola Spirig, in the runup to her fifth Olympic Games, is spending a lot of time in the Engadine preparing for the Games. «No place else I enjoy running more than I do up here,» says the pro. For her and her family, the pandemic was in some ways also beneficial: with competitions and training camps cancelled, she spent more time at home. «That gave us the freedom to do more stuff with the kids.» For her, nothing has changed about what matters most in life.

Philipp Bosshard is a triathlete too. By way of endurance sports, he is fighting his way back to a normal life after having suffered life-threatening burns in an accident. He works out 18 hours a week and goes to physiotherapy several times a week. Philipp's personal motto seems apt for any crisis: «I had to fight hard for everything that I re-gained. As soon as I pause, I lose my mobility all over again.»

«Sometimes you need to lower your sights and recognise that the sky is not the limit,» sports manager Gian Gilli concurs. «In recent times, we have lost some of our humility.» In the article, he recalls the cancellation in spring of the ice hockey world championships. «That was a big setback for my team. But, we also had to put things into perspective: the pandemic was a global problem, and we needed to contribute to the effort to save lives.»

The Stalla Madulain demonstrates well that a successful idea can result from a lack of funds. Both Gian Tumasch Appenzeller and Chasper Schmidlin, the two initiators, didn't have any ready money when they tackled the project. Little choice they had but to keep the renovations to a minimum, resulting in the gallery's special allure. Today, this unusual gallery has become a permanent fixture in the Engadine art scene.

For Ludwig Hatecke, too, there is something positive to be said about the crisis. «People rediscovered the pleasures of preparing a meal,» says the butcher, renowned well beyond his native Zernez. He and his son David have successfully expanded to Zurich. Both father and son will be at any one of their shops at all times. They sell meat, and above all, they give tips on how best to cook them. «The final verdict that makes or breaks our success takes place at our clients' homes, in their kitchen and at their dinner tables.»

Gian slalom ace Daniele Sette from St. Moritz, in turn, had a successful start into the competition season. In his portrait, he ponders on the two giant slalom races in Adelboden scheduled for early January. «Last year, in Adelboden, I proved that I am capable of finishing at the front. Like everyone else, I haven't come just to take part but to win.»

«Active Alpine Lifestyle» is a bilingual magazine in its 14th edition. Earlier editions portrayed fashion magnates such as Ermenegildo Zegna and Franco Loro Piana, sports superstars such as Bode Miller, Patrick Küng and Marco Odermatt, but equally local personalities such as Daniel Meuli, the photographer from Sils. The latest edition stacks up 154 pages and has a print run of 10,000 copies. It is laid out in several hundred hotel rooms, all of Skiservice's 14 stores, and many restaurants and shops in the valley. Print copies can be picked up for free; the magazine is also available to read online.

Digital edition of the magazine
https://issuu.com/designterminal/docs/skiservicecorvatsch_magazin_winter2021_issuu