The sculpture that dissolves into light

«The Sky Over Nine Columns», the sculpture by the German artist Heinz Mack, has been put on display in St. Moritz. Several hundred guests attended the unveiling ceremony of the nine golden steles on the shore of Lake St. Moritz; the unveiling of the steles was accompanied by the world premiere of the musical composition «The Sky Over Nine Trumpets» by Bernd Franke. The giant sculpture will remain in St. Moritz until March – the current exhibition is one of the stops on the installation's journey through Europe. 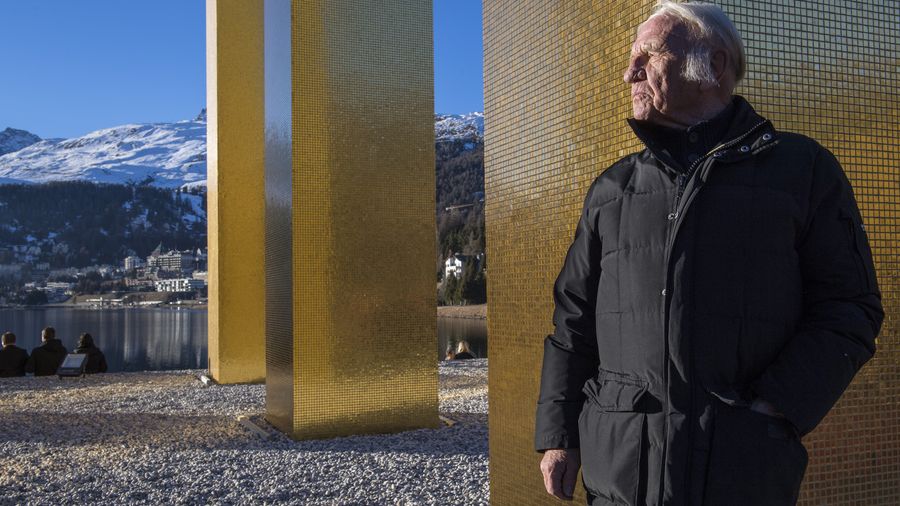 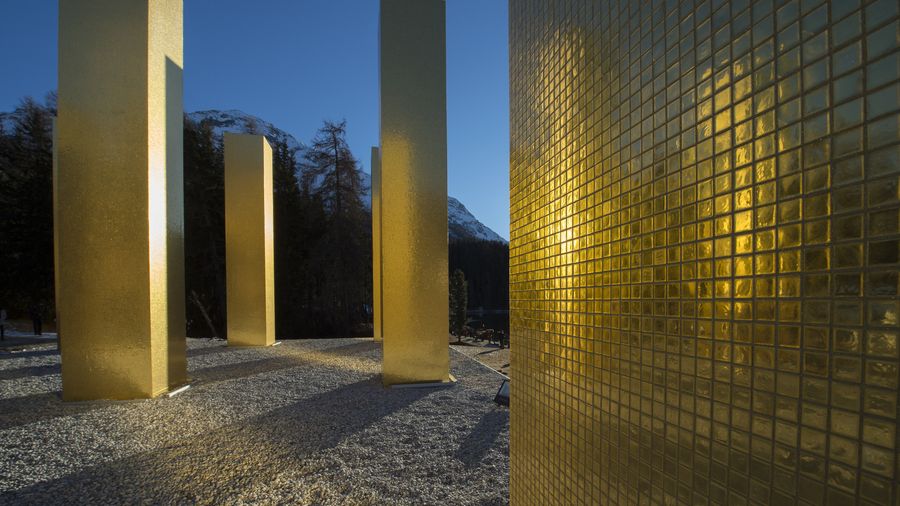 The St. Moritz winter season kicked off with a cultural highlight: several hundred guests made the journey to St. Moritz, many from abroad, to attend the unveiling of the sculpture «The Sky Over Nine Columns». «The colossal natural setting of the Engadin valley shows the sculpture to its best advantage,» said Ralph Dommermuth at the opening of the exhibition. «The nine golden columns will fascinate the people in the Engadin at any time of the day — and night, thanks to the lighting,» he adds.

The ‹Stiftung Ralph Dommermuth Kunst und Kultur› is sending off Heinz Mack's work of art on a journey across Europe. The sculpture by the German artist consists of nine, square-shaped steles that soar up seven-and-a-half meters and have a footprint of 14 by 19 meters. The work of art was exhibited on the occasion of the Biennale in Venice in 2014, as well as in the sculpture park of the Sakip Sabanci Museum in Istanbul and at the Ciutat de les Arts e Ciències in Valencia. It is the first time it is displayed in a natural setting.

«The sheer sensuality of the sense of sight»

«That is exactly how I had always envisaged it,» says the enthused artist Heinz Mack (85). «The unique and intensive light of the Engadine lets the sculpture shine so brightly that it all but dissolves itself into light and is no longer perceived as a material sculpture. The nine steles turn into objects that radiate their very own energy. It is the sheer sensuality of the sense of sight.»

Heinz Mack and the many guests were delighted by the world premiere of the musical work «The Sky Over Nine Trumpets» by the German composer Bernd Franke. The composition, which was performed by nine trumpeters, is a modern interpretation of baroque sounds. «I was fascinated by the ceremony in the soft afternoon light, and I was very pleased with the debut performance of my composition,» said Bernd Franke.

The sun set behind the Engadin mountains shortly after the unveiling. The clear-cut geometrical shapes of the golden steles shone in the evening light and presented a sharp contrast with the natural surroundings of pine woods, snow-covered meadows and the Lake St. Moritz against the spectacular mountain backdrop. Viewers can look forward to the fascinating visual transformation of the sculpture as its 850,000 light-reflecting gold leaf tesserae create different moods with the changing lights throughout the day.

The installation is located just outside of St. Moritz, off the footpath around the lake. It can only be reached on foot. The footpath is very popular. Hence, the sculpture «The Sky Over Nine Columns» is set to become one of the major attractions of the coming winter.

The journey of this exceptional giant sculpture to select locations around the world is an art project laid out for many years to come. It has been conceptualised and realised in collaboration by the Ralph Dommermuth Stiftung Kunst und Kultur and Beck & Eggeling International Fine Art. «The Engadin light, which is second to none and already had Giovanni Segantini go into raptures, makes the golden mosaics shine brighter than elsewhere,» said Beck & Eggeling's Michael Beck. The sculpture will remain on display on the shores of Lake St. Moritz until spring. It is as yet undecided where the sculpture will travel to next after St. Moritz, said the gallery co-owner.

Images for editorial use can be downloaded free of charge from www.flickr.com/ninecolumns/

Full-HD videos are being made available on Dropbox as they are being produced, both as unedited footage and as edited clips: http://tinyurl.com/zl39z3v

The installation «The Sky Over Nine Columns», which Heinz Mack created between 2012 and 2014, consists of nine steles, each more than seven meters high, with a light-reflecting surface comprised of more than 850,000 tesserae made of 24-carat gold leaf.

In conceiving the installation, Heinz Mack drew on a concept for Berlin's Pergamon Museum that has not yet been realized. It is based on a substantive examination of the Temple of Altintepe in Anatolia as well as temples in Egypt and the six pillars of the temple of the Queen of Sheba in Yemen. In the course of these researches, various underlying principles have become evident to Heinz Mack. The installation not merely emphasizes the intercultural connection between Orient and Occident, which plays an important role in the artist's entire oeuvre, through the referencing of historic temples alone, but also through the material of which the mosaic is composed.

Heinz Mack developed his own language of light and color in the 1950s and ranks among the leading representatives of kinetic art. «The Sky Over Nine Columns» refers to his concept of the «light stele», that was formulated and realized for the first time in the artist’s Sahara project in 1958. His artworks in public spaces - be it urban or in nature - are always conceptualized as objects of light: «Light is crucial to my art. When it comes to light, I want to go to the very limits of the possible.»

Heinz Mack was born in Lollar (Hesse, Germany) in 1931 and attended the Kunstakademie Düsseldorf from 1950 to 1953. In 1956 he also completed his studies of philosophy at the University of Cologne. In 1958 he founded the ZERO group together with Otto Piene, and they were joined by Günther Uecker in 1961. With their events, exhibitions and manifests, ZERO gained great attention and rapidly developed into a worldwide movement. Above all, the artists utilized light and movement as a new form language to overcome the pessimism of the post-war years and to gain access to a more open world.

Heinz Mack participated in the Kassel documenta in 1964 and 1977. Together with three other artists, in 1970 he represented Germany at the 35th Venice Biennale. In 2001 Heinz Mack was honored with an extensive exhibition at the Museum of Contemporary Art in Teheran as the first Western artist to be shown there after the Islamic revolution.

Since his major retrospective at the Bundeskunsthalle in Bonn, on the occasion of his 80th birthday in 2011, the interest in the art of Heinz Mack has increased enormously. In the major ZERO exhibition at the Guggenheim Museum in New York in 2014, he was represented by twenty-three works. Since then, his achievements have attracted international interest at ZERO exhibitions in Berlin, Amsterdam and Istanbul. Mack's artworks can be found in more than 130 public collections. A multitude of publications as well as two movies document his multimedia achievements. Heinz Mack lives and works in Mönchengladbach and on Ibiza.